Judge Dredd inspired costumes are getting to be more and more common sights at Comic Conventions. There are several reasons for this, not least the surge of interest generated by the 2012 movie. I’d say that the increase in interest though definitely started with Judge Minty.

The image to the right above is Senior Street Judge Burdis arresting a Dredd impersonator. Side note, Karl Urban is great as Dredd. This is a comic inspired uniform by Planet Replicas.

Planet Replicas obtained a licence for Judge Dredd uniforms following their work on the fan film Judge Minty, you can read my interview with Daniel Carey-George about that project.

A full uniform, including a made to measure leather suit, a helmet and all the pads, boots gloves, etc, will set you back £1995.00.

There are quite a number of Judges on patrol in that uniform now, I was part of Lawgiver: A Celebration of Dredd and we had a large turn out of Judges as well as our own core group.

On the right is just a selection of those present, there were more.

If you click on that picture you can see the larger version and you will see there are several Dredd 2012 Judges as well as a Brit Cit Judge (Dredd 2012 inspired) and Cal-Hab Judge (comic inspired). 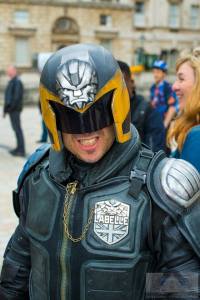 There are no licensed Dredd 2012 uniforms. These are all either home-made by the owner or produced with the assistance of fellow costume enthusiasts. A home-made screen accurate uniform costs around £800.00.

On the left  is a closer look at Judge Labelle’s uniform. Again you can click on the picture for a larger version.

You can easily spot the major differences such as the Lion emblem on the helmet and the Union Flag on the badge.

On the right is a picture showing the Lion shoulder pauldron instead of the Eagle of Mega City One.

This uniform shows how much thought goes in to some of the costumes that are put together. 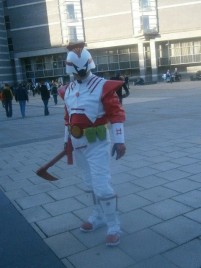 Here is an example of the attention to detail that fans go to. This is a Hondo City Judge (Japan). I saw him at Thought Bubble last year and he’s taken this costume to several other conventions.

This is all home-made and I believe all his own work. He has shared many of his design secrets for this and other costumes. Compare his uniform to the comic version. A brilliant adaptation of the comic.

There are many home-made versions of Judge uniforms, comic and film versions alike. It is great to see such public expressions of affection for Judge Dredd.

There are many dedicated fans around the world. Take the video below as an example, this one I haven’t seen for myself I saw the video on a friend’s Facebook page. 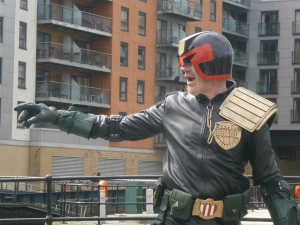 Dredd has even been seen at the Royal Armouries in Leeds. The national museum displays part of the countries collection of militaria.

In May 2013 the Royal Armouries had a special event showing the arms and armour of characters from fiction. They included a gun fight between Judge Dredd and Pa Angel.

And this brings us back to where I started because this was a uniform lent to them by the Judge Minty team. A prototype of the Planet Replicas version. 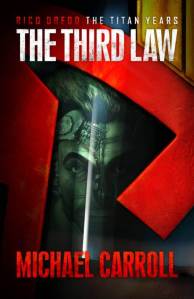 Judge Dredd. There were once two of them, Joe and his ‘twin’ Rico. I say ‘twin’ as they were clones not biological brothers. Clones of Eustace Fargo, the man who established the Judges of Mega City One.

Michael Carroll is one of the popular writers currently writing Judge Dredd for 2000AD and Judge Dredd Megazine. He has also written more than a dozen novels and novellas including the Quantum Prophecy series. You can read reviews of several of his works elsewhere on this blog. a list is at the bottom of this article.

END_OF_DOCUMENT_TOKEN_TO_BE_REPLACED

lland. Jose Ortiz provided the art and gets co-creator credit. Initially printed in Scream! a British anthology comic with a horror theme. Scream! later merged with the rebooted Eagle and The Thirteenth Floor was one of the stories to transfer across.

Hibernia have published two collected volumes of The Thirteenth Floor. I’ve previously reviewed other publications from Hibernia, The Tower King, Death of Valiant and Beyond 2000AD

The Thirteenth Floor Volumes 1 & 2 are their latest publications. Volume 1 is a re-issue from 2007, Volume 2 is out for the first time. END_OF_DOCUMENT_TOKEN_TO_BE_REPLACED

Just so that no one is under any misconception – I’m reviewing this from a Pdf, no physical review copies exist.

So, Dredd 2012, how about that? Regular readers of this blog will know that it was that film that started me out doing this Reviews Blog. I actually took time out of a trip visiting my Daughter and her family in Liverpool to go to London for the Fan Prerelease Screening of this film after winning the ticket on 2000AD’s Twitter.

The Hardback version of this book has sold out at source – that source was the 2000AD Futureshop (they dropped the name ‘Futureshop a while back, I’m old school).

I am aware that you may be able to bag one of these at OK Comics in Leeds. END_OF_DOCUMENT_TOKEN_TO_BE_REPLACED 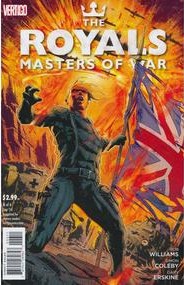 The Royals: Masters of War
a six issue mini-series

This is the final issue of the series.

The Royal families around the world rose to power because they alone possessed super powers. After living thousands of years and fighting in many wars Jimmu, Emperor of Japan, agreed with the lesser Royals that no Royal would become involved again in the wars of lesser beings.

WWII Britain and Prince Henry, the second son of the King of England could no longer stand aside and see the common people of Britain face the wrath of Germany alone. END_OF_DOCUMENT_TOKEN_TO_BE_REPLACED 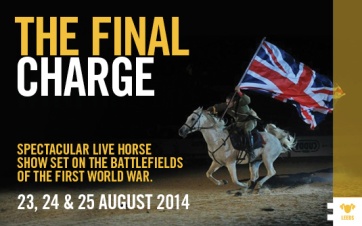 I’ve been to see the team several times, you’ll find many articles on this blog about them. They always put on a great show and are very welcoming to the audience, you can get up close to the stars of the show afterwards (yes I mean the horses).

END_OF_DOCUMENT_TOKEN_TO_BE_REPLACED

I did an article on the 2000AD  Booth on the 5th and there was some nice stuff on show.

IDW have a shed load of comics at varying price range… for full descriptions and cover images on IDW’s website.

A few exclusives are available for pre-order from IDW’s webstore beginning today, July 7. Fans that preorder will be able to pick up their books from the IDW booth – they are exclusives remember. All exclusives will be available during show hours at the booth.

Signing at their booth will be:
Mike Mignola
Dave Gibbons
Walter Simonson
and Jim Steranko

Descriptions below in the words of IDW: END_OF_DOCUMENT_TOKEN_TO_BE_REPLACED

One Night in Sixes
by Arianne ‘Tex Thompson

This is the first book in the series ‘Children of the Drought’.

A Western by any other name, as the cover suggests. However it isn’t exactly any type of Western that might have been written by J T Edson or Louis Lamour.

If you’ve ever read a Western, I read a few in my teens, you’ll find this book familiar territory. The travel across country sounds similar and the boarder town could be anywhere in the West of USA. It could be but it isn’t

In fact I’ll use a paraphrase of that hackneyed expression – this certainly isn’t Kansas.

This story is not just a Western – I’m not sure if the publishers would prefer ‘Horror’ or ‘Fantasy’ but given they also publish the British anthology comic 2000AD I can’t see either label worrying them.

END_OF_DOCUMENT_TOKEN_TO_BE_REPLACED

2000 AD will be found at Booth 2806,  with signings from creators including artists; Jock, Chris Burnham & Henry Flint and Dredd writer Michael Carroll.

The Star Spangled Banner – held at the Smithsonian

I read an interesting article today written by Michael Molcher – he is the PR for Rebellion (owners of 2000AD) so he is the chap I get the 2000AD or Abaddon books products from for my reviews. That’s his day job.

Mike is a member of the Sealed Knot, an English Civil War re-enactment Society. I read his blog from time to time, I follow it so keep up to date. The article that I am talking about is entitled Does 4th July 1776 mark the end of the English Civil Wars?.

In the article Mike discusses the similarities between the English Civil War, The American War of Independence and the American Civil War. It is an interesting read. END_OF_DOCUMENT_TOKEN_TO_BE_REPLACED