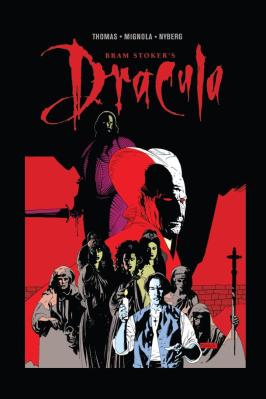 25 years ago this was the last Pencils Mike Mignola did before launching Hellboy.

I usually put a Spoiler ranking in the title of my articles but given it is a reprint of a comic based on a well known film based on a famous novel… there isn’t really much I could put that is a Spoiler, That said my Spoilers are usually well below the warning I give.

This was originally published as a 4-part min-series in colour. Presented in this collection in black and white.

The Inks by John Nyberg look very true to Mike Mignola’s work to me.

Preview pages are at the end of this article, they certainly don’t spoil anything. END_OF_DOCUMENT_TOKEN_TO_BE_REPLACED

I came across the art of Miguel Vasquez on Twitter recently.

You can see much more of these images, including some WIP (work in progress) on Miguel’s Instagram account.

Fan art is often something created deeply from the heart. I think Miguel enjoyed a lot of Cartoon Network, other channels are available (he seems to have watched several). END_OF_DOCUMENT_TOKEN_TO_BE_REPLACED

Iconic villain Don Uggie Apelino was introduced to readers of 2000AD in Prog 39 in November 1977. He was instantly popular and though his appearances are few the concept behind the character has persisted.

Don Uggie and his henchmen were uplifted Apes. Uplifted in 2000AD refers to an animal which has been genetically modified to have an intelligence on a par with the average Human. This was explored further in Prog 126 in August 1979 in the story The Guinea Pig That Changed The Law this isn’t included in this collection as it was about a Cat and a Guinea Pig, I digress.

The stories presented here are a selection of the many stories that explore Uplifts and how they fit in to the world of Judge Dredd. They include Harry Heston, a character originally created by fans Stewart Perkins and Jake Lynch for the fanzine Class of ’79, here in stories written by Arthur Wyatt and Jake Lynch. END_OF_DOCUMENT_TOKEN_TO_BE_REPLACED