America is often held up as one of the most important stories in Judge Dredd’s history. You may have noticed I didn’t phrase that sentence ‘Judge Dredd story’. The lead story was originally published in the first issue of Judge Dredd Megazine and was received with critical acclaim. Granted not all were fans but many were won over on second readings. those that needed winning over mostly didn’t like the fact that Dredd wasn’t the central character.

Central to this story is America Jara, a girl born in Mega City One. She is the first child born in the Big Meg to an immigrant family from the Puerto Rican Wastes. Named America for the new start her family are getting. Then there is her childhood friend Bennett Beeny. Bennett grows to be a successful entertainer. America goes a different root, she becomes a terrorist fighting for her beliefs. America believes in Democracy.

Preview pages are at the end of the review, after the list of Contents. END_OF_DOCUMENT_TOKEN_TO_BE_REPLACED

There’s been a lull in these articles, I usually do one each month rounding up any 2000AD/Judge Dredd get-togethers or Events that I am aware of. Normal service will resume in August, which is very close.

Just two Events to tell you about at very short notice, apologies to both organisers but I am sure there will be great turnouts without any help from me.

Friday 31st July is the next date for the Belfast 2000AD Discussion Group and Saturday 1st of August is the Opening Night Preview of the art display Judgement in Cardiff! END_OF_DOCUMENT_TOKEN_TO_BE_REPLACED

Atkinson Action Horses will be at Royal Armouries each Wednesday during the six week School Holiday period. The first shows are tomorrow, Wednesday 29th July 2015.

Atkinson Action horses are a world famous stunt display team that have appeared in a nymber of Films and TV shows. Recently Ben Atkinson was stunt double for Aiden Turner in BBC’s Poldark. All the horses in Poldark were from Atkinson Action Horses.

Mark Atkinson, seen in the picture above, and his son Ben lead the team that can call on over a dozen riders. They have a large stock of horses of a variety of breeds. As well as providing horses and riders for Film and TV they also provide horses to Jousts around the country such as at Royal Armouries and Arundel International Tournament. They breed horses for sale to riders and train horses and riders commercially.

What can you expect at these shows? END_OF_DOCUMENT_TOKEN_TO_BE_REPLACED

The House of Daemon Published by Hibernia Press
Available on Comicsy £9.00

The House of Daemon created by Alan Grant,
John Wagner and José Ortiz

Hibernia have a reputation of bringing British Comic classics back to life in quality reproductions. I have reviewed several of the previous publications from Hibernia and here is another.

House of Daemon replaced The Tower King in the British anthology comic Eagle. starting in issue 25.

The writers are a famous pair of British comic heavyweights. John Wagner and Alan Grant brought us Judge Dredd and introduced the world to Judge Death. They’ve entertained us with stories in British comics and US comics alike. They are working together on Rom of the Reds published by Blackhearted Press

The artist is Spanish artist Jose Ortiz who illustrated the preceding story, The Tower King and The Thirteenth Floor in another British Anthology, Scream. END_OF_DOCUMENT_TOKEN_TO_BE_REPLACED 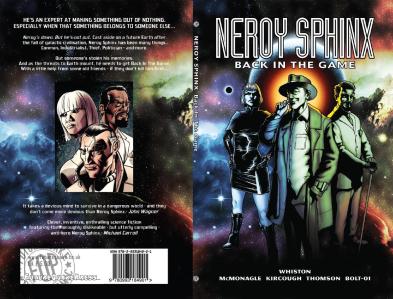 Neroy Shinx
Back In The Game
Published by Futurequake Press

Available from the FQP Webshop £5.00

Neroy Sphinx, Conman, Thief, Industrialist and Politician. His memory has been stolen and he nees it back so he can get Back In The Game.

This is a creator owned project from Daniel Whiston under the guidance of Futurequake Press. Chapters 2 to 11 have previously been published in FutureQuake, a periodical Anthology from the publishers of the 2000AD fanzines Zarjaz and Dogbreath.

There are quotes on the back cover from John Wagner, creator of Judge Dredd, and Michael Carroll, author of the Quantum Prophecy/New Heroes series of novels. To have such good quotes from the British Comic great John Wagner is quite something. John encourages newcomers and has recruited from Futurequake. Similarly Michael Carroll is a force to reckon with. He is one of the current stable of Judge Dredd writers for 2000AD as well as writing over a dozen novels. There is an introduction by James Lovegrove, New York Times Bestseller.

This is the first work I have reviewed by Daniel Whiston. END_OF_DOCUMENT_TOKEN_TO_BE_REPLACED

He had been in a coma since crashing in to a recovery vehicle at Suzuka during the Japanese Grand Prix, in 2014.

This was the first death in Formula 1 since the death of Ayrton Senna.

I assume any table would show Senna’s name above Vettel. END_OF_DOCUMENT_TOKEN_TO_BE_REPLACED

Rule32 Promotions started off with a crowd funding pitch on Indigogo for a Cafe/Venue for get-togethers to celebrate all things geek.

The idea was not just to have a themed Cafe but to run events, such as Games Nights, a place for geeks run by geeks. I popped a wee bit in to the hat after hearing about the idea on Twitter. I got in touch with them and arranged to interview them about their idea.

The interview is available here and if you read to the end you’ll see me suggesting a Dredd get-together and/or Judge Minty night. Funny that given how things have turned out. END_OF_DOCUMENT_TOKEN_TO_BE_REPLACED

Razorjack began life as a creation of Artist John Higgins. John wrote and illustrated the original 14 page story in 1999, self published by John. There was a sequel, a two issue miniseries, published in 2001 by Com.X. These stories were collected in a Trade Paperback published by Com.X in 2009.

In 2013 a Razorjack collection was published by Titan, much of the dialogue reworked by Michael Carroll. I reviewed this version earlier this year.

What I was unaware of when I read the collected edition was that in 2009 there had been a limited edition paperback by Michael Carroll. I became aware of this first when Michael announced he was issuing a Kindle Edition of this novel. I learnt of the earlier paperback on the 2000AD Forum.

There is no need to have read the comics to follow the action in the novel. However if you are a fan of Michael Carroll’s YA Fiction, New Heroes, you do need to know that this book is aimed at older readers. END_OF_DOCUMENT_TOKEN_TO_BE_REPLACED

This summer holiday Royal Armouries have a variety of themed events.

I’ll bring more details when I am aware of them. From the poster it looks like they’ll be looking at myths and legends and putting them in historical context. END_OF_DOCUMENT_TOKEN_TO_BE_REPLACED

I’m late writing this review, things have been a little less than ideal here. Better late than never.

Headlined and organised by Dr Crow and the Forbidden Zone.

I arrived a little later than planned due to the heat, I was going to go straight from work but in the end realised I needed to go home and change. So I missed the opening act and came in part way through the second support, Hombre. END_OF_DOCUMENT_TOKEN_TO_BE_REPLACED